Something not working? Open an issue on GitHub or message us on Slack.

This guide is applicable if running JupyterLab >=2.x. If running older versions or using other editors (such as VSCode or PyCharm), check out the Other editors (VSCode, PyCharm, etc.) guide.

Ploomber integrates with Jupyter to make it easy to create multi-stage pipelines composed of small notebooks. Breaking down logic in multiple steps allows you to develop modularized pipelines that are easier to maintain and deploy.

Before executing scripts or notebooks, Ploomber injects a new cell that replaces the upstream variable at the top of the notebook (which only contains dependency names) with a dictionary that maps these names to their corresponding output files to use as inputs in the current task.

For example if a Python script (task.py) declares the following dependency:

And another-task has the following product definition:

The following cell will be injected in task.py before execution:

The cell injection process happens during execution and development, allowing you to develop pipelines interactively.

When using jupyter notebook, scripts automatically render as notebooks. If using jupyter lab: Right-click -> Open With -> Notebook as depicted below:

If you want to configure JuptyerLab to open .py files as notebooks with a single click, see the corresponding section.

Task-level and DAG-level hooks are not executed when opening scripts/notebooks in Jupyter.

You can develop entire pipelines without leaving Jupyter. The fastest way to get started is to use the ploomber scaffold command, which creates a base project, check out the guide to learn more: Scaffolding projects.

Once you execute ploomber scaffold, you’ll see the three new scripts under the scripts/ directory. You can then start adding the relationships between tasks.

Let’s say your scripts/clean.py script cleans some raw data. That means you want to use the raw data as input (which is downloaded by scripts/get.py), you can modify the upstream variable to establish this execution dependency.

To inject the cell, reload the file from disk: 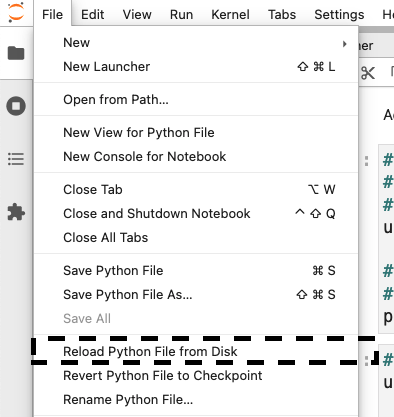 Now you can continue developing your cleaning logic without hardcoding any paths. Furthermore, when executing your pipeline, Ploomber will run scripts/get.py and then scripts/clean.py

Ploomber needs to parse your pipeline.yaml file to inject cells in your scripts/notebooks; if an error happens during the parsing process, you won’t see any injected cells. Check out the Troubleshooting section below for details.

Ploomber supports scripts and notebooks as source formats for tasks. We recommend using .py files, but you can use the traditional .ipynb format if you prefer so. As long as your file has a tag named parameters, it will work fine (click here to learn how to add the parameters cell)

The advantage of using .py files is that they’re much easier to manage with git, the disadvantage is that .py only contain code (not output), so after editing your .py file, you need to run the task to create the executed notebook (the one you declare as a product of the task).

However, if you want a more ipynb-like experience with .py files, you can use jupytext’s pairing feature to sync the output of a .py to a .ipynb file.

We rely on Jupytext for the .py to .ipynb conversion so that you can use any of the .py flavors, here are some examples:

Check out Jupytext documentation for more details on the supported formats.

In most cases, the extension configures when you install Ploomber; you can verify this by running:

If Ploomber appears in the list, it means it’s activated. If it doesn’t show up, you can manually activate it with:

If you want to use the extension in a hosted environment (JupyterHub, Domino, SageMaker, etc.), ensure Ploomber is installed before JupyterLab spins up. Usually, hosted platforms allow you to write a custom start script: add a pip install ploomber line, and you’ll be ready to go. If you cannot get the extension to work, post a question in the #ask-anything channel on Slack. Alternatively, you may replicate the extension’s functionality using the command line, check out the this guide to learn more.

When you start the Jupyter app (via the jupyter notebook/lab command), the extension looks for a pipeline.yaml file in the current directory and parent directories. If it finds one, it will load the pipeline and inject the appropriate cell if the existing file is a task in the loaded pipeline.

If your pipeline spec has a different name, you can create a setup.cfg file and indicate what file you want to load. Note that changing the default affects both the command-line interface and the Jupyter plug-in.

Note that paths are relative to the parent directory of setup.cfg.

Alternatively, you can set the ENTRY_POINT environment variable. For example, to load a pipeline.serve.yaml:

export ENTRY_POINT must be executed in the same process that spins up JupyterLab. If you change it, you’ll need to start JupyterLab again

Note that ENTRY_POINT must be a file name and not a path. When you start Jupyter, Ploomber will look for that file in the current and parent directories until it finds one.

If a pipeline is not detected, the Jupyter notebook application will work as expected, but no cell injection will happen. You can see if Ploomber could not detect a pipeline by looking at the messages displayed after initializing Jupyter (the terminal window where you executed the jupyter notebook/lab command, you’ll see something like this:

The message above means that Ploomber could not locate a pipeline.yaml file to use for cell injection, take a look at the entire error message as it will contain more details to help you fix the problem. A common mistake is not to include a pipeline.yaml file in the same directory (or parent) of the script/notebook you’re editing.

If a pipeline.yaml is found but fails to initialize, the Jupyter console will show another error message:

A common reason for this is an invalid pipeline.yaml file.

Note that even if your pipeline is missing or fails to initialize, Jupyter will start anyway, so ensure to take a look at the console if you experience problems.

Another common situation is ModuleNotFoundError errors. Jupyter must parse your pipeline in the process that runs the Jupyter application itself. If your pipeline contains dotted paths (e.g., tasks that are Python functions, task hooks, task clients, etc.), loading the pipeline will fail if such dotted paths are not importable. Scripts and notebooks are handled differently. Hence, a pipeline whose tasks are all notebooks/scripts won’t have this issue.

If you cannot find the problem, you can move to a directory that stores any of the scripts that aren’t having the cell injected, start a Python session and run:

lazily_load_entry_point is the function that Ploomber uses internally to initialize your pipeline. Calling this function allows you to replicate the same conditions when initializing your pipeline for cell injection.

Ploomber parses your pipeline whenever you open a file to detect changes. The parsing runtime depends on the number of tasks, and although it is fast, it may slow down file loading in pipelines with lots of tasks. You can turn off continuous parsing by setting jupyter_hot_reload (in the meta section) option to False. You’ll have to restart Jupyter if you turn this option off to detect changes.

Jupyter can detect more than one pipeline in a single project. There are two ways to achieve this.

The first one is to create sibling folders, each one with its own pipeline.yaml:

Since Ploomber looks for a pipeline.yaml file in the current directory and parents, it will correctly find the appropriate file if you open some-script.py or another-script.py (assuming they’re already declared as tasks in their corresponding pipeline.yaml.

If using Python functions as tasks, you must use different module names for each pipeline. Otherwise, the module imports first will be cached and used for the other pipeline. See the following example.

The second option is to keep a unique project root and name each pipeline differently:

In this case, Ploomber will load pipeline.yaml by default, but you can switch this by setting the ENTRY_POINT variable to the other spec. (e.g., pipeline.another.yaml). Note that the environment variable must be a filename and not a path.

There are two ways to use Ploomber in Jupyter. The first one is by opening a task file in Jupyter (i.e., the source file is listed in your pipeline.yaml file.

Another way is to load your pipeline in Jupyter to interact with it. This second approach is best when you already have some tasks, and you want to explore their outputs to decide how to proceed with further analysis.

Say that you have a single task that loads the data:

If you want to explore the raw data to decide how to organize downstream tasks (i.e., for data cleaning). You can create a new notebook with the following code:

The dag variable is an object that contains your pipeline definition. If you want to load your raw data:

There are other things you can do with the dag object. See the following guide for more examples: Interactive sessions.

As your pipeline grows, exploring it from Jupyter helps you decide what tasks to build next and understand dependencies among tasks.

If you want to take a quick look at your pipeline, you may use ploomber interact from a terminal to get the dag object.

Opening .py files as notebooks with a single click¶

It is now possible to open .py files as notebooks in JuptyerLab with a single click (this requires jupytext>=1.13.2).

If using ploomber>=0.14.7, you can enable this with the following command:

If running earlier versions of Ploomber, you can enable this by changing the default viewer for text notebooks. For instructions, see jupytext’s documentation (click on the triangle right before the With a click on the text file in JupyterLab section).